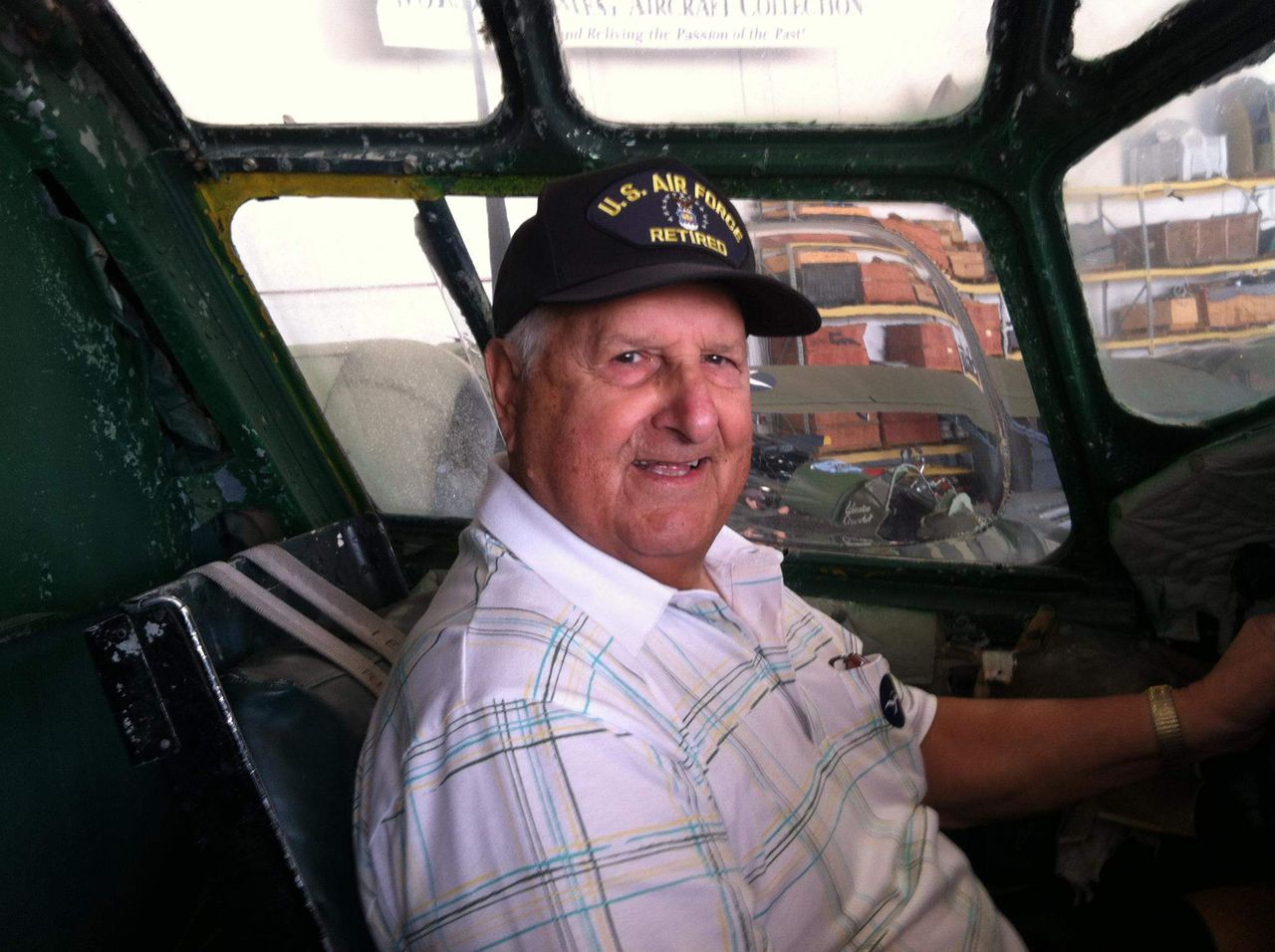 A righteous disciplinarian, a proud family man and a dedicated public servant: this is how some of the former students and colleagues of longtime Northampton vice principal and teacher Eugene B. DeFilippo Sr. remember him after his death premature earlier this week.

DeFilippo, known as “Flip” and “Gene” to those close to him, died Monday at age 97. The Easthampton man, who is mourned by his six children and numerous grandchildren and great-grandchildren, led a long and full life marked by years of military, athletic and educational service.

A World War II veteran, DeFilippo flew more than 50 combat missions in a B-24 Liberator, an American heavy bomber, with the 15th United States Air Force out of Italy. A career educator, he worked at Northampton High School for decades as a football coach, history teacher and assistant principal, a role from which he retired at the age of 1986.

“He was a very proud man, a very conscientious man and a dedicated family man. That all sums him up,” said former Northampton manager Gordon Noseworthy, who worked alongside DeFilippo for five years until ‘on his retirement. “He was a great family man. He had several children and adored his wife. He was also a great gardener. He had a beautiful garden.

On Friday, DeFilippo was identified by authorities as the driver killed in the fatal collision in Deerfield on Labor Day. Law enforcement said he crashed into a commercial truck on Route 116 and died at the scene. The passenger in his car sustained non-life-threatening injuries, and those in the truck did not require treatment beyond assessment by medical personnel. No other details of the circumstances surrounding the fatal accident have been made public.

For Noseworthy and others, the news of DeFilippo’s death was a shock to the system. He had recently thought about reconnecting with his former colleague when he heard about the tragedy.

“It’s totally shocking. I couldn’t believe it. How many people live to be 97 to have something like this happen to them?” Noseworthy said. “It was very sad. I was shocked to hear about it.

Christy Daley, who graduated from Northampton High School in 1986, the same year DeFilippo retired, admired her former vice-principal and credited him with helping him revive his early career. Learning of his death was hard to digest.

“It is unimaginable that her long, full and happy life could have ended so tragically,” Daley told MassLive in an email.

Those who knew DeFilippo, as a student or peer, remember him for both his rigor and his dedication – to the teenagers he worked with as well as to his own family.

Daley recalled how she had to spend time in DeFilippo’s office because she was “one of those kids who hated school.” However, despite Daley’s academic struggles, DeFilippo saw potential in her. He told her she was the fastest typist in high school, arranged a work-study program for her, and eventually helped her get a job at the local chamber of commerce as a secretarial assistant.

She also recalled years later, in 2016, when he made an appearance at her high school class’ 30th birthday reunion as the guest of honor. At the event, Eugene DeFilippo and his wife, Anne E. DeFilippo, who died just a year ago in January 2021, had a great time dancing, mingling and “talking about the good old days.”

The meeting six years ago was also the last time Noseworthy saw DeFilippo. The former principal noted how “motivating” it was to see DeFilippo at the event surrounded by so many of his students who were happy he was there.

“Gene was really popular at that reunion, and the kids seemed to really like him,” Noseworthy said. “These kids were all around him, and he was laughing, and he was having a wonderful time.”

The reunion reminded Noseworthy of another memorable event decades earlier, DeFilippo’s retirement party at the Northampton Hotel in 1986, where there was dancing and drinking, a large turnout and much admiration for the man. former deputy director.

“He was very celebrated when he retired, by former colleagues, students and many of his former football players,” Noseworthy recalled.

Noseworthy, whose educational career in Massachusetts spanned decades, joined the administration of Northampton High School in 1981 as principal, working with DeFilippo until his retirement five years later. He enjoyed his time with the former assistant manager, whom he called just disciplinarian who steered a “tight ship”.

“He was very interested in history as a humanities teacher. As assistant manager, he made sure to hold everyone accountable: “You do this, these are the consequences,” Noseworthy said. “Without bias, Gene held people accountable. His operation was a tight ship.”

“The spin-off is that he did his job,” added Noseworthy. “The deputy director is responsible for discipline. Gene was very thorough in tracking all forms of discipline, and he was very fair about it.

In 2018, at age 94, DeFilippo made an appearance as a guest speaker at one of the city’s Veterans Tribute luncheons. After the event, former Northampton Mayor David Narkewicz job a photo of DeFilippo holding a framed black-and-white photo of himself in his military uniform in the 1940s. At the time, he had enlisted in what was then called the Army Air Corp, a branch which later became the US Air Force.

Narkewicz explained how DeFilippo “answered his nation’s call to duty in 1943.” After enlisting in the military, undergoing basic training and completing flight schools, DeFilippo was assigned to a B-24 squadron in Italy and, at age 19, he flew dozens of missions from bombardment against strategic German targets above “heartbreaking and often murderous skies”. of Europe”, according to the former mayor.

“He turned 94 last month and next summer he and his wife, Anne, will be celebrating 70 years of marriage,” Narkewicz said in his post. “Thank you, Mr. DeFilippo, for sharing your incredible story of courage, daring and service to our nation as a member of the greatest generation!”

“Flip, as she called him, had just returned from service in the United States Air Force, and she was determined to spend the rest of her life with him,” the obituary reads.

Eugene and Anne DeFilippo courted for four years while he attended College of the Holy Cross in Worcester. Eugene DeFilippo enrolled in the school under the GI Bill and played quarterback there. Meanwhile, Anne DeFilippo’s love of football flourished, her obituary noted. The couple married in September 1949, lived 71 years of marriage and raised six children along the way.

After Eugene DeFilippo graduated from Holy Cross in 1949, he became a teacher and coach for 14 years at Northampton High. Along with becoming an assistant manager, he also spent time coaching the Holyoke Knights, a semi-professional team that played in the 1950s.

Eugene B. DeFilippo Sr.’s children and grandchildren also took up sports. For 15 years, his son, Eugene B. DeFilippo Jr., was Boston College’s athletic director and is now an athletic executive. Decades before, like his father, he held the quarterback position as an undergraduate at Springfield College.

Eugene DeFilippo Jr.’s son and DeFilippo Sr.’s grandson, John DeFilippo, also caught the football bug, playing the sport at James Madison University in Virginia and working as a coach for the Chicago Bears in the NFL, the Minnesota Vikings and the Philadelphia Eagles.

For 53 years, Eugene DeFilippo Sr. and Anne DeFlippio lived in Florence. He worked at the city’s high school and she worked part-time at the Cooley Dickinson Hospital birthing center, and on Jan. 27, 2021, she passed away peacefully, her obituary read.

Anne DeFlippo’s obituary said she and her husband’s home were always filled with activity, including watching football every Sunday.