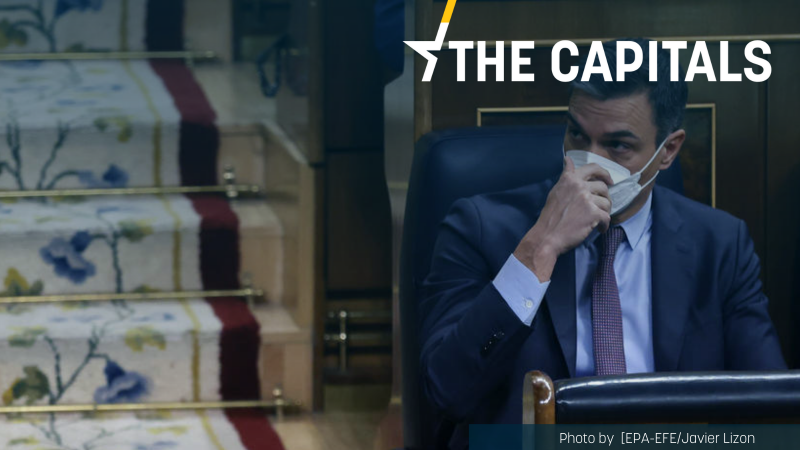 The Capitals brings you the latest news from across Europe, thanks to on-the-ground reporting by EURACTIV’s media network. You can subscribe to the newsletter here.

European news you deserve to read. welcome to Capitals by EURACTIV.

In today’s news from the capitals:

The Italian, Spanish, Portuguese and Greek prime ministers are meeting on Friday at a mini “Mediterranean summit” in Rome to find consensus on reforming European energy markets and reducing energy prices, the report said. from official sources to EURACTIV’s partner, EFE. Read more.

Macron presents a program centered on sovereignty. French President Emmanuel Macron, who recently confirmed his candidacy for re-election, presented the electoral program which he hopes will create “an independent nation in a stronger Europe”. Read more.

Italian lawmakers approve moves to send arms to kyiv. The Chamber of Deputies approved a decree on Ukraine which provides for aid and measures to help refugees and to send arms and equipment. The measure was approved by 367 votes for, 25 against and 5 abstentions. 231 deputies did not take part in the vote.(Simona Zecchi | EURACTIV.it)

Dispatch from the Slovak border: “We don’t understand why Putin is doing this to us”. As war rages in neighboring Ukraine, Slovakia faces the biggest refugee crisis in its history, but the welcoming response from its people and government stands in stark contrast to the last migration crisis in 2015. Read more .

Fit-for-55 package key for Slovakia’s energy independence. Slovakia fully supports the objectives and areas of measures of the Fit for 55 package, said Michal Kiča, state secretary at the Ministry of the Environment, during a meeting in Brussels on Thursday. Read more.

A Czech company is launching a long-awaited nuclear tender process. The Czech electricity company ČEZ on Thursday launched a tender to select a builder for a new nuclear unit at the Dukovany power plant. Read more.

Many Fidesz voters blame Ukraine for the war. Sixty-four percent of Hungarians view the Russian invasion of Ukraine as an act of aggression, but ruling party voters are divided on the issue, according to a recent Publicus Institute survey. Telex reported. Read more.

Russia is losing Bulgarian fans due to the war in Ukraine. Russia’s invasion of Ukraine has caused 40% of Bulgarians to view Russia in a negative light, compared to just 3% who now view Russia positively, according to a survey by sociological agency Trend. Read more.

Romania against the no-fly zone in Ukraine. The imposition of a no-fly zone over Ukraine could become the basis for the extension of the conflict in Ukraine, Romanian President Klaus Iohannis said on Thursday, adding that NATO did not want to a military conflict with Russia. Read more.

Scientists from Croatia and Spain are looking into fusion to power the EU’s powerhouse. Croatian and Spanish scientists will look into the materials needed to build a European power plant where electricity will be produced by fusion in two to three weeks. Read more.

The Slovak government is making a second attempt to pass a bill on electronic communications. The Slovenian government confirmed on Wednesday that it had presented anew version of the Electronic Communications Bill after Parliament rejected the previous version in early February. Read more.

Croatia will support Bosnia and Herzegovina’s membership in NATO if Croats are treated on an equal footing. Bosnia and Herzegovina’s Euro-Atlantic integration is in Croatia’s national interest. This cannot be achieved without the equality of Croats in this country, Croatian Minister of Foreign and European Affairs Gordan Grlić Radman said on Thursday. Read more.

The agreement on the electoral law is a “historic opportunity” for Bosnia and Herzegovina to move closer to EU membership. Bosnia and Herzegovina (BiH) should reach an agreement on the electoral law, said the Angelina Eichhorst, Director General Europe and Central Asia at the European External Action Service, adding that it would be a “historic opportunity” for the country to move closer to “EU candidate status”. Read more.

Albania sends military aid to Ukraine. Albania has sent military vehicles to help Ukraine fight against Russia, the government announced on Thursday as its troops are in Latvia, and now also in Kosovo.

“The NATO alliance has never been so united as it is today. There are no more differences between the allies, they are all in unison, ready and convinced that we must strengthen our defense by supporting Ukraine,” the minister said.

Albania became a NATO member in April 2009. The Alliance is modernizing a military airport in Stalin’s former town in south-central Albania, now called Kucove, making it its first air base in the Western Balkans. (Exit.al)