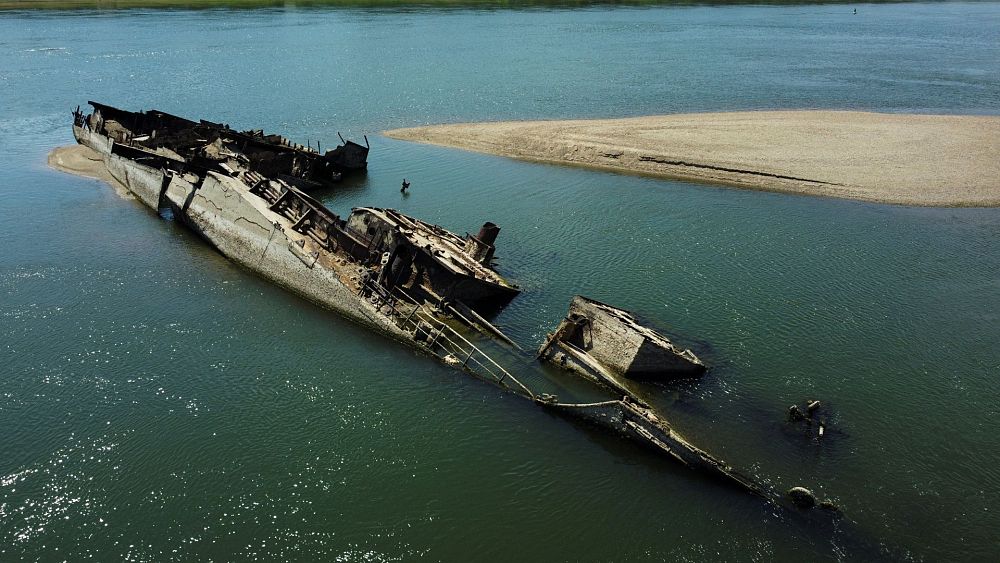 As Europe experiences its worst drought in at least 500 years, new findings are surfacing.

Landscapes across Europe and beyond are being changed as Forest firesto melt glaciers and other disasters threaten to annihilate entire regions.

As these terrains change, River the beds are drying up, exposing never-before-seen archaeological treasures.

Here are some of the most unbelievable find so far.

A strange Roman ghost town has risen from the depths, more than 2000 years after it disappeared under water.

The old encampment spent centuries submerged under a reservoir on the Lima River to the northwest Spain.

The chilling ruins – now revealed by a record drought – include evidence of a temple, baths, hospital and military barracks.

Italy: old piles of the bridge of Nero

The Tiber quickly narrowed during Italy’s worst drought in 70 years. Low water levels revealed two of Nero’s old bridge piers. The bridge was built in the first century for Nero to reach his gardens from Gianicolo Hill, near what is now St. Peter’s Square. The pillars fell into disrepair in the third century and are usually submerged under water.

During Italy’s driest season, one of the piers usually emerges, but seeing two is rare.

“Because the river water level is so low now due to widespread drought across Italy, we can see many more bridge piers than usual,” says historian Anthony Majanlahti.

Serbia: Nazi warships along the Danube

A fleet of Nazi warships surfaced along the Danube in Serbia. The Danube is Europe’s second largest river, but this year it has approached record high water levels caused by drought.

The EU and the European Investment Bank are financing an operation to remove the ships. Experts estimate that there are around 40 sunken ships in the river.

Spain: The Dolmen of Guadelperal

Nicknamed ‘spanish stonehenge‘ The Dolmen of Guadelperal has been exposed due to the receding waters. The stone circle, which dates back to 5,000 BCE, was submerged in 1963 due to flooding caused by one of General Franco’s rural development projects. Since then, it has only been seen four times. But with the Iberian Peninsula the driest in 1,200 years, more sightings could be on the horizon in the future.

Germany: Hunger Stones along the Rhine

In Germany, the so-called “hunger stones” surfaced along the Rhine. These rock types are traditionally found in Central Europe, with carvings to commemorate famine and other difficulties. Dates visible on the most recently discovered stones include 1947, 1959, 2003 and 2018. They are said to act as low water warnings for future generations.

Italy: a World War II bomb in the Po

As the waters of the Po shrank amid the ravages Drought, Italy discovered an unexploded The Second World War bomb. Italian military experts detonated the find safely. In other areas, the water level fell so low that the crumbling walls of a medieval town emerged.

Iraq: the lost city of the Mitanni empire

In Iraq, an entire Bronze Age city was discovered in the Mosul Dam. The archaeological site of Kemune dates back around 3,400 years and was once an important city of the Mitanni Empire. The discovery took place following the emptying of the Mosul Dam reservoir, in an effort to save dying crops. Iraq is one of the most vulnerable countries in the world to the effects of climate change.

China: discovery of an island in the Yangtze

China also made discoveries in dried up rivers as the country faces a 70-day heat wave and continued drought. With the falling water levels of the Yangtze, an entire island emerged, complete with three ancient statues.

China’s largest freshwater lake, Poyang Lake, also reached low-season levels at the earliest since records began in 1951. On August 19, it was measured at just 9.87 meters. .

Satellite images released by earth-imaging company Planet Labs PBC show how a previously lush green section near the village of Zhupaoshan has dried out in shades of brown.

At the Crystal Palace in the UK, visitors to the park came across newly exhibited dinosaur sculptures in its lake. Crystal Palace Dinos, an organization that protects these sculptures, said on Twitter that the lack of rain and lack of regular dredging were to blame.

across the Atlantic, dinosaurs also made their mark this year. In Texas, drought has dried up the Paluxey River, revealing impressive dinosaur tracks that have been hidden for 113 million years.

Elsewhere in Vegashorrible mafia secrets are on display in Lake Mead. As extreme temperatures reduce the lake’s capacity to just 27%, the remains of at least three people have been found, including a man with a bullet hole in his head.