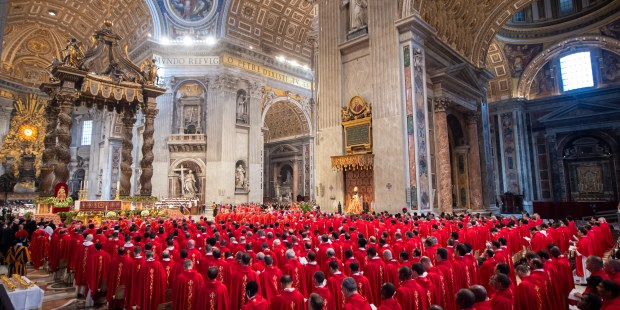 These four new cardinals wear the red hat after long lives of unique service to the Church.

Three 80-year-old bishops emeritus and two priests of the same age were called on May 29, 2022 by Pope Francis to join the Sacred College on August 27, 2022, in addition to 16 cardinal electors. We’ve profiled the voters here, and now give you an overview of new cardinals who have already passed the age limit to vote in a conclave.

On June 16, the resignation of Bishop Luc Van Looy, Bishop Emeritus of Ghent, criticized for his handling of cases of abuse in his Salesian congregation and his diocese, reduced the number of these non-elected cardinals to four.

I.MEDIA presents the journey of these personalities chosen by the pope because of their experience and expertise on sometimes sensitive subjects.

The Jesuit canonist, born in Rome on July 5, 1942, has been a recognized expert for several decades, and the Vatican has often called on his services, particularly for the restructuring of the Legionaries of Christ and the drafting of the Apostolic Constitution. Predicate Evangelium. His ability to be dispatched into a wide range of special situations has some describing him as the Vatican version of a Navy SEAL.

After joining the Society of Jesus in 1966, Father Ghirlanda was ordained a priest in 1973. His long career as a university professor began in 1975 and, over the decades, he put his expertise at the service of many institutions in the Holy See. Among the bodies that have called on his services are the Dicastery for Institutes of Consecrated Life and Societies of Apostolic Life, the Pontifical Council for the Laity, the Congregation for the Evangelization of Peoples, the Supreme Tribunal of the Apostolic Signatura, the Vatican City State Court of Appeal, the Congregation for the Doctrine of the Faith and the Dicastery for Laity, Family and Life, of which he has been a member since 2018.

As an expert, and therefore without the right to vote, he participated in the 1994 synod on consecrated life and the 2001 synod on bishops, of which Cardinal Bergoglio was the assistant general rapporteur, replacing Cardinal Egan who did not couldn’t leave New York because of the September 11 terrorist attacks.

As rector of the Pontifical Gregorian University from 2004 to 2010, Father Ghirlanda was also involved in a number of sensitive issues, including the implementation of the Apostolic Constitution Anglicanorum Coetibuspromulgated by Benedict XVI in 2009 to allow the creation of specific ordinariates for Anglicans who have joined Rome.

In 2010, he took part in the survey on the Legionaries of Christ and the Regnum Christi movement after the revelations of the abuses committed by their founder, Marcial Maciel Degollado, then became Pontifical Assistant of the Legionaries of Christ to supervise the rewriting of the statutes of this congregation. He was also called for canonical matters concerning the association of Memoirs Dominiconsecrated lay people linked to the Communion and Liberation movement.

Finally, the pope called on this specialist in Saint Ignatius of Loyola to work on two essential and very complex projects of his pontificate: the reform of the Constitutional Charter of the Order of Malta, and the Apostolic Constitution Predicate Evangelium. He will certainly have an important role during the August 29-30 assembly, during which the cardinals will be called upon to reflect on the Constitution.

Asked by the Vatican media about his cardinalship, which in his case is not linked to an episcopate, Fr. Ghirlanda explained that he does not consider it an honor but a responsibility for future missions, despite his 80 years old: “It is an act that a Jesuit assumes fully in obedience. We do not see it as an enrichment but as a request from the pope for an even greater service than has been rendered so far,” he said.

Archbishop Fortunato Frezza: An eclectic journey between Scripture, football and the Synod

Bishop Fortunato Frezza, born on February 6, 1942, was the last priest ordained in 1966 for the small diocese of Bagnoregio before it merged with that of Viterbo 20 years later. While he was parish priest of the village of Sipicciano from 1971 to 1984, Fr. Frezza taught Scripture in several institutions, including the Pontifical Gregorian University.

He worked for the General Secretariat of the Synod from 1983, becoming under-secretary of this body from 1997 to 2014. He thus accompanied the evolution of the Synod under three pontificates: those of John Paul II, Benedict XVI and finally from Francis.

In 2013, he became a canon of Saint Peter’s Basilica and camerlengo of the Chapter in 2022. He has also been master of ceremonies of the Order of the Holy Sepulcher since 2015. After the announcement of his cardinalate, despite his 80 years, he was ordained bishop of Saint-Pierre in the presence, among others, of Cardinal Baldisseri, whose assistant he had been at the General Secretariat of the Synod.

Among the eclectic passions of the new cardinal: Gregorian chant and Saint Angela of Foligno, but also football. Former goalkeeper, Fortunato Frezza was even the chaplain of AS Roma, one of the two big clubs of Rome, rival of Lazio, from 1986 to 2011. Bishop Frezza accompanied the team during the season 2000-2001, which led them to victory. the Italian championship, with the French world champion Vincent Candela, and of course the star of Italian football, Francesco Totti.

Bishop Arrigo Miglio, a bishop at the service of workers, from Valle d’Aosta to Sardinia

Archbishop Arrigo Miglio, who was Archbishop of Cagliari from 2012 to 2019, notably welcomed Pope Francis to the Sardinian capital on September 22, 2013. This pilgrimage, which was one of the Pope’s first trips to Italy, had a special historical significance. for the Argentine pope: It was indeed Sardinian sailors who, in the 16th century, inspired by their patron saint Our Lady of Bonaria, gave her name to the capital of Argentina, Buenos Aires.

Born on July 18, 1942, near Ivrea, in a territory that links the French-speaking Aosta Valley and the metropolis of Turin, Arrigo Miglio was ordained a priest in 1967 for his diocese, where he held various positions in the parishes then served as Vicar General.

As a priest, he directed several institutions, including the Alpine House Gino-Pistoni, named after a resistance fighter, in Gressoney-Saint-Jean, a particular commune since it is a German-speaking enclave; despite its French-sounding name, the language spoken by the locals is Greschòneytitsch, a dialect derived from German.

Later, when he was national chaplain of the Scouts and Guides of Italy, he was appointed in 1992 by John Paul II bishop of Iglesias, a diocese of Sardinia, where he worked in particular for the good of the workers of the mines of coal. He then returned to his home diocese, becoming bishop of Ivrea from 1999 to 2012, during which time he was responsible for social issues within the Italian episcopate. Benedict XVI then appointed him Archbishop of Cagliari in 2012, a position from which he retired three years ago.

Born March 29, 1942 in Bucaramanga, Colombia, the Archbishop Emeritus of Cartagena is a religious of the Society of Jesus and Mary, a society of apostolic life founded by the Frenchman Saint Jean Eudes in 1643. After training in social sciences in Chile, the Eudist cleric was ordained a priest in 1967 and served as a seminary trainer and social doctrine disseminator in the Colombian Episcopal Conference in the 1970s.

In 1979, he became director of studies at the Theological and Pastoral Institute of the Latin American Episcopal Council (CELAM) in Medellín for nine years, and taught in Louvain (Belgium), Madrid (Spain) and Verona (Italy) for the preparation of missionaries sent to Latin America. In 1988 he became Eudist Provincial of Colombia, also assuming the position of Secretary General of the Latin American Confederation of Religious, appointed by John Paul II.

In 1992, the Polish Pope appointed him Bishop of Zipaquirà, a position he held alongside that of Secretary General of CELAM from 1995 to 1999 and finally President of the same organization from 1999 to 2003. In this capacity, he took part in the synod of 2001 on Bishops, of which Cardinal Bergoglio, future Pope Francis, was the assistant general rapporteur.

In 2002, the year Franco-Colombian senator Ingrid Betancourt was kidnapped, he was taken hostage by the FARC for a week. During the general audience on Wednesday, November 13, 2002, John Paul II called for his release, finally obtained by a military operation.

In 2005, after a few months as a coadjutor, he became archbishop of Cartagena, the major port in northern Colombia on the Caribbean coast, where a large part of the population is of African origin. By personal appointment of Benedict XVI, he participated in the 2009 Synod on Africa held at the Vatican.

His episcopate in Cartagena was marked by the visit of Pope Francis on September 10, 2017, during which the pontiff had, among other things, inaugurated a home for the homeless and celebrated a mass in the port area. Bishop Jiménez Carvajal, during the thanksgiving at the end of the mass, was very moved and showed a deep connection with the first Latin American pope.

Bishop Jiménez Carvajal left his position as Archbishop of Cartagena in 2021, at the age of 79, after 29 years as bishop.