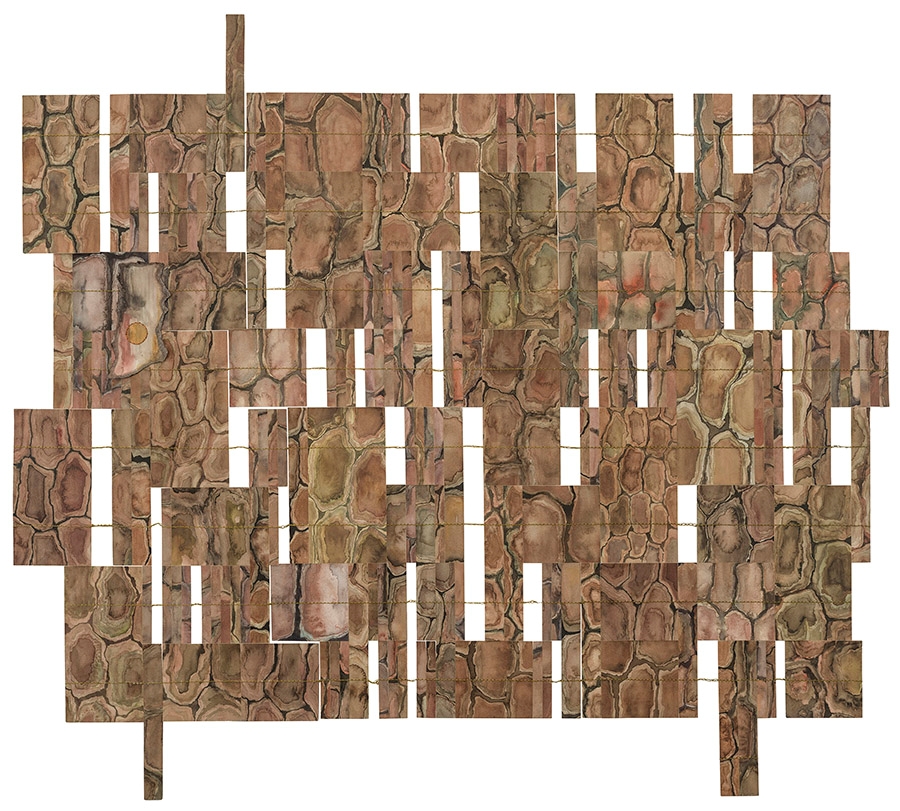 “Metaphor” (45 by 40.5 inches, watercolor on paper with hand stitching, 2022) is one of the pieces featured in an exhibition of new work by Laura Terry, associate professor of architecture.

As the wood and wood initiatives of the Fay Jones School of Architecture and Design grow and strengthen, Professor Laura Terry wanted to contribute to these conversations through the lens of a artist.

“I wanted to tell a more poetic story of the forest,” she said, “from an artist’s perspective and engage with these initiatives in a way that was authentic to me.”

The result is a body of work she shares in the “How to Measure a Forest” exhibit, currently on view through October 21 at the Fred and Mary Smith Exhibit Gallery at Vol Walker Hall on the campus of U of A. This is part of the Fay Jones School’s series of public exhibitions.

An opening reception will be held at 4:30 p.m. on Friday, August 26, and the public is invited to attend.

Terry, an associate professor of architecture, began his observations and research for this work at Anthony Timberlands in Bearden, Arkansas. It made sense to start there, since the company is the largest lumber producer in the state, supports programs within the Fay Jones School, and owns over 200,000 acres of (mostly) pine forest. In 2019, she spent several days there with her guide, asking questions as they walked through the forests and stopping to take photos and draw.

Terry has plenty of trees available for study on the eight wooded acres of the Ozarks she shares with her husband and their pets. But she also spent a week in the Bavaria region of Germany; Rome, where she drew the umbrella pines of Italy threatened by a boring beetle; and in his native landscape of Georgia, which is home to tall oaks and numerous pines.

When she started this work in 2019, she imagined having an exhibition no later than 2020. An opportunity to teach at the U of A Rome center in the spring of 2020 led her to rethink the way she approached the work. Because she would be traveling and working in a small space, she invested in a watercolor set. In Rome, she bought a few small blocks of watercolor, and she began to paint on bark, studies on textures. These pieces were initial ideas, studies and all from memory.

When the pandemic forced everyone back home in March 2020, she continued to do bark paintings, spending hours at her dining table. She created about 100 small paintings – each about 5 by 7 inches – with no idea what she was going to do with them.

“I think painting them during those early months of the pandemic and lockdown was my therapy,” she said. “I had worked with watercolor before, especially for quick studies or travel sketches. I never considered the medium for larger, sustained pieces. Watercolor is temperamental. You have to let it do what she wants to do. It’s hard for a control freak. So maybe I’ve learned to let things happen organically?”

Eventually, Terry cut out the little paintings, and they became the “Tree Tapestry” piece. This is a collection of cut-out watercolors, with vertical grain, “quilted” with hand-sewn circles.

Her template for the circles came from the piece of cardboard left over after cutting out the pieces for a two-player board game she ordered during the pandemic. It occurred to her that the circle is the architectural convention for drawing trees in plan, which she liked. In addition to the sewn circles on “Tree Tapestry”, she used this pattern to create tiny imaginary landscapes, mostly of pine trees, which ended up populating different rooms throughout the exhibition.

During this creative journey, Terry rediscovered his love for depicting landscape. This has been the subject of his work for 20 years.

“For a while, the work was exclusively about reducing landscape elements to pure geometries. You could always find a line or an edge that represented the horizon, and the color palette usually referred to a landscape, but the work was so abstract that ‘landscape’ didn’t immediately come to mind,” she said. “This new collection has pieces that are overtly and unequivocally countryside located with parts still abstract. I appreciate that my two artistic sensibilities coexist in this collection. It’s like a forest that way. Every tree, even among the same species, is different.”

This exhibit features nearly 30 pieces – the smallest at just 4 by 4 inches and the largest at 48 by 56 inches, with every size in between. The intention of the work is to show the forest at micro and macro scales, so some pieces are bark scale while others reveal the forest from a distance.

One of the most textured pieces is “Measure Me By The Tree Rings”, a collage of graphite, monotypes, watercolor and found doilies. The piece is a vertical composition measuring 18 and 7/8 inches wide by 40 and 1/2 inches high.

“I was in the woods in the winter, when the leaves were gone, and I was surprised how colorful the landscape was. It was still green with moss and lichen,” Terry said. “I watched the way lichen grows in circles on tree trunks, and I immediately thought of crochet doilies, you know the ones your grandmother used for home decor?”

She acquired placemats from a local saver and began adding them to this room. The resulting texture of this piece is important, she said, and the fact that it’s made up of many smaller pieces makes it “forest-like.” She hand stitched the concentric rings onto the composition, which adds another element of texture and gives the piece a different meaning.

“A forest is a collection of trees; the trees are individuals, unique, but collectively they make up the forest. I like this metaphor, the relationship of part to whole that is in the work. many pieces of this are collections or aggregates of smaller pieces combined to form a larger piece,” she said.

Terry applied for a Dean’s Research and Creative Practice Fellowship at the Fay Jones School to support this research and body of work. This investment and the support of his creativity have been essential to his success.

“Being an artist is a luxury. It did not escape me. As the world was shattered into pieces during the pandemic, I was painting. Painting bark with watercolor on paper. The proposal I wrote and the funding I’ve received is confirmation that this type of work matters,” she said.

Her commitment to creating this work – and the associated deadlines and schedules – allowed her to stay focused, to look to the future when so much was uncertain.

“I tend to be ‘glass half empty’ except when I’m making art. I lose myself in the act of doing. And I tend to do my best to think while I’m doing”, she said. “Or the opposite. I don’t think at all, instead I paint.”

Admission to the exhibition is free. The Exhibit Gallery is located on the first floor of the Vol Walker Hall and is open to the public from 8 a.m. to 5 p.m. Monday through Friday. The U of A is closed September 5 for Labor Day.