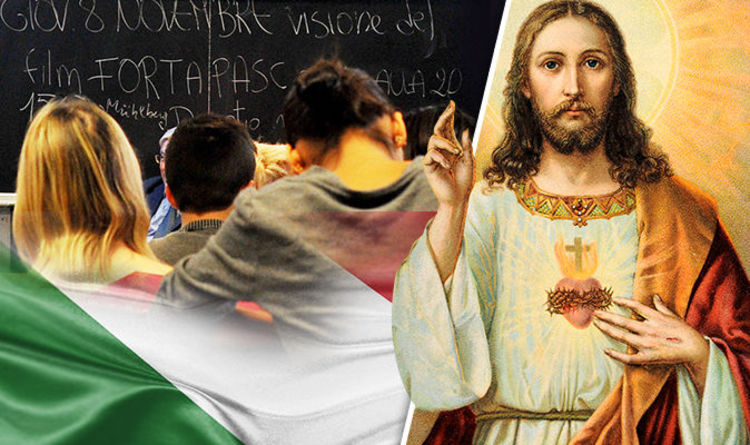 Director Paola Bellini and her students were to mount their December production next Monday, and the students have been practicing their repertoire of three Christmas carols for several weeks.

However, in a controversial move that outraged parents, the lyrics to a popular Christmas song were replaced – and the word Jesus was shockingly omitted.

Students will now sing from lyrics sheets that read â€œbecause this feast is for youâ€ instead of the more traditional â€œbecause Jesus was bornâ€.

Angry parents have lashed out at the school, saying the name of Jesus should promote unity and brotherhood instead of division and censorship.

Even the priest from Pontevico, a small town in the province of Brescia, took a stand against the changes, saying: â€œForeigners are welcome to get to know our culture, which we should not deny because it does not offend anyone.

However, Ms Bellini hit back at the critics, saying they were exploiting their children to defend their political beliefs.

She said: â€œThe children will sing songs that evoke universal themes of peace and solidarity. 30% of our students are not Catholics and this concert is open to everyone.

â€œThis is not a show made just for Christians. It’s a matter of respect.

“In our classrooms there are so many crucifixes and paintings depicting the Virgin Mary, but in addition to these symbols there must be others.”

She added, “The adults are running a children’s show. They slander what was supposed to be a song of joy.”

She said the school was founded on the basis of multiculturalism and should not discriminate against other religious – even on Christmas.

Ms. Bellini added: â€œOther institutions are those which must promote the values â€‹â€‹of the Catholic religion. Pope Francis preaches the opening. These Catholic fundamentalists amaze me.