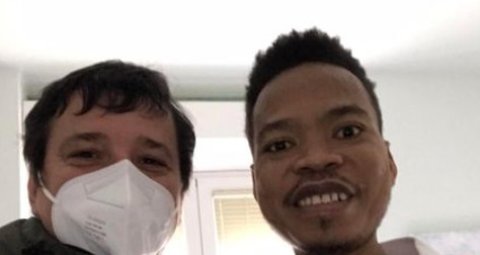 A young migrant dying of cancer had one last wish: to see his family in Ghana. So his village in Italy raised funds for his flight. The pope spoke about this story during his Sunday prayers.

When a young migrant, suffering from terminal cancer, expressed the wish to return home to hug his father, the inhabitants of a small village in northern Italy did everything in their power to fulfill his wish. This moving story was told by Pope Francis during his Sunday prayers in the Vatican this week.

The story of the young migrant

The 25-year-old Ghanaian migrant named John is said to have landed on the island of Lampedusa a few years ago and later settled in the Italian village of Monferrato, 7,000 kilometers from his home country.

According to the pope, John found work at a vineyard in Vignale Monferrato, but had to stop working when he fell ill with liver cancer.

The therapy reportedly failed to stop the growth of the tumor and the condition of the young Ghanaian, treated at the Monsignor Zaccheo’ hospice in Casale Monferrato, rapidly worsened.

John, a practicing Catholic, is said to have told everyone assisting him – doctors, nurses, psychologists – of his desire to return home and embrace his family – his father and brothers – once again.

A village raises funds for a trip to Ghana

To grant the young man’s wish, his village in Italy took action. The locals are said to have organized a trip for him and someone to accompany him. They collected funds for flights and medicine.

“Everyone came together for a young man and it’s a story that can’t stay in your heart. And when today,” the hospice said, “we heard about ourselves from Pope Francis, we couldn’t help but be flattered and proud.” work done.”

Once in Ghana, John sent a voice message to the village mayor, Tina Corona, and councilor Gian Mario Cotti, saying, “I’m fine. A little better, yes. We have arrived. Thank you. Thank you very much. Send my regards to all Vignale, my family, my house and everything.”

Hoping to set a positive example

Gabriella Gaudio, the owner of the farming business where John’s roommate worked, was said to have been by John’s side during this difficult time. “Since I found out, I haven’t left him alone. I’ll never forget when he said goodbye to me and hugged me and said, ‘You’re my mother. ‘” she said. He would have lost his real mother when he was only 11 years old.

“Despite the pain and suffering,” Gaudio said, “he was pure, with a good soul. Almost as if what he had been through hadn’t soured him. From 14 to 16, he was in Libya, then he arrived in Lampedusa, injured in body and mind, a cooperative allows him to come to Vignale, which is a chance [for a new start.]”

“We never gave it up,” the mayor said with tears in her eyes. “I am proud of my community, of my people, of the work team… If […] Vignale’s example can be useful to others, so visibility is welcome. If the right things are emulated, then that’s good.”