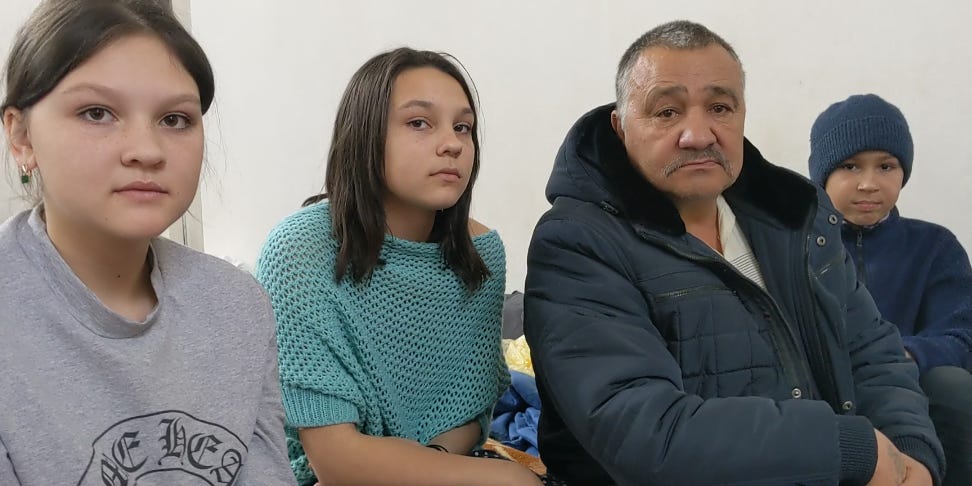 Get the Insider app

BEREGSURANY, HUNGARY — When Russia invaded Ukraine on February 24, the small village of Irina north of kyiv was one of the first areas to come under bombardment. But it wasn’t in their neighborhood yet, so his family stayed.

For 12 days they stayed in their rural community near Irpin.

There was no school or work, planes flew overhead and tanks bearing the letter V rolled through the streets.

Every now and then there would be an explosion, but there were only residential houses in their village, so they felt like they could stay safe.

Everything changed on March 8.

“For the first time, they started bombing us – us civilians – at 3 a.m.,” Irina, who was sitting on a mattress on the floor of a closed elementary school here, told Insider on Tuesday morning. . “Our houses were burning, but we still hoped it was some kind of accident – ​​that someone had made a mistake. Then, at 5 a.m., it was clear it was for us.”

Playing videos on her phone, Irina showed Insider the rubble surrounding her home. Rockets landed in the residential area, wiping out everything nearby. All that was left was scorched earth and a Russian Orthodox church.

Irina and her three children – 11, 12 and 13 – grabbed the small bags they had already packed and ran for their lives.

“She got a gift, a dog, and she had dreamed of having a pet for ages, but we couldn’t take her,” Irina said, pointing to her 12-year-old daughter. “We were going on foot and we weren’t sure people would pick us up if we had a dog with us.”

Irina’s husband, who turned 60 in December and therefore did not have to stay and fight, joined them.

Walking only alongside rubble and burning grass for countless miles, they hoped someone would pick them up. But their family was large, and at this stage of the war there was little traffic left.

“We were walking and walking and listening. We were trying to stop the cars, but the cars wouldn’t stop,” 12-year-old Olga told Insider. “After a while a car stopped and took us a bit. And again after a while several cars stopped and we were all able to adjust.”

The volunteers took the family to the border in Transcarpathia. Then vans from a refugee camp in the small Hungarian village of Beregsurany came to pick them up.

From no plan to a new life

Arriving at the refugee camp, a few buildings on a small property in a rural village about three hours east of Budapest, Irina and her family had no idea where they would go next.

They wanted to find a home, a place to work and a school for the children, she said. We didn’t know how long it would take. For now, however, the camp was full of volunteers who would try to help them.

Locals tossed ladles of goulash from a large vat into bowls and served it to the dozens of Ukrainians at the site. Food trucks handed out sandwiches and treats. Smaller children played with donated toys or on nearby playground equipment.

Doctors helped those who needed treatment after their trip – for Irina it was a tranquilizer pill.

Speaking to an Insider reporter and translator on the school floor, the family looked up.

Three men in firefighter uniforms stood in front of them. They did not speak Russian, Ukrainian or Hungarian, which are the main languages ​​spoken at the camp, but rather Italian.

The men told the translator they had driven 12 hours overnight and had enough room to take 10 people back to Rimini, Italy, a tourist community on the coast. They had already arranged an apartment for a refugee family and could have the children in school by Wednesday.

The tourist season was about to begin, said one of the men. Getting work in the industry would be easy.

Irina and her husband hesitated. They had spent their whole lives in Ukraine and knew nothing about Italy except that it was very far from home.

Hungary, however, is not an easy place for foreigners to assimilate, explained the translator.

It was the first time the country had opened its doors to refugees, and there was no infrastructure to help those in need.

Italy was a good opportunity, the local translator told him.

The family spoke with the firefighters – through the translator – for about 10 minutes, before agreeing to leave with them.

By early afternoon, they were in a van en route to their new life, 2,000 kilometers from the only home they had ever known.

Although their family is safe, they still live in fear for Ukrainians who have not come out. Three people, all over the age of 80, remained in what was left in their village.

Irina insisted that Ukrainian airspace should be closed and humanitarian corridors should be spared.

“Everything we’ve seen, what my children have seen, it’s a horror to experience this,” she said.