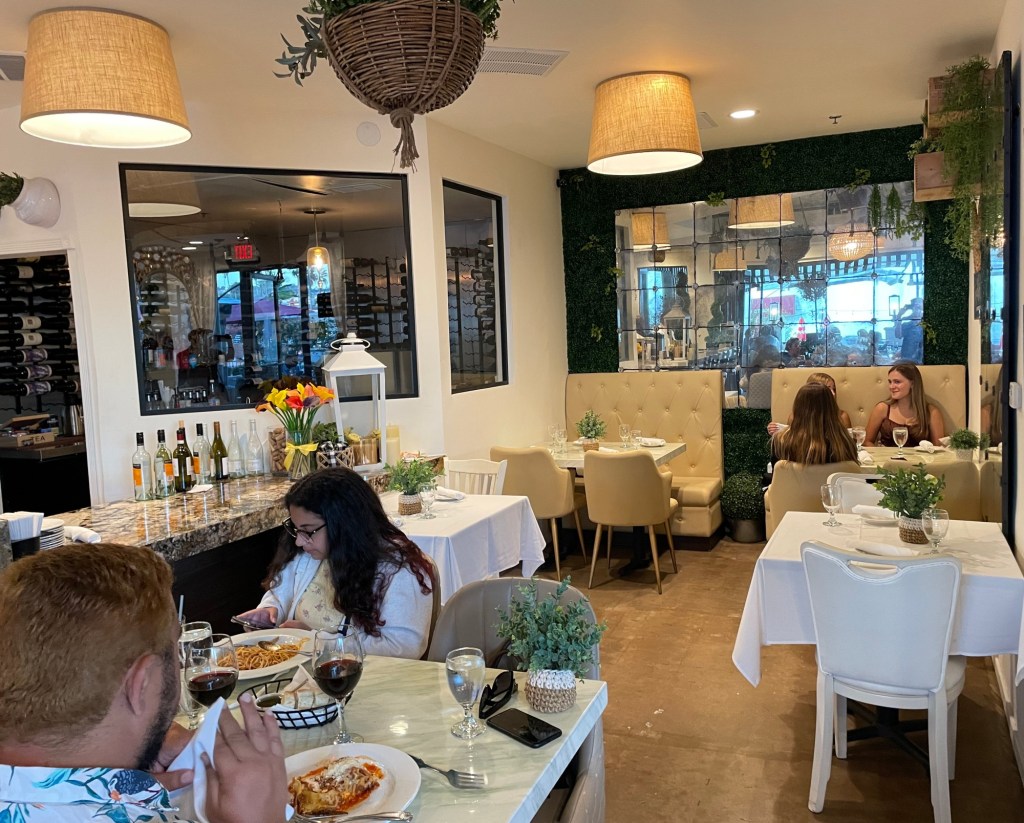 I was going to take an elderly relative on one of our cheerfully retro tours of Little Italy – most likely to Mama D’s where the red sauce reigns and the pasta is served bigger and bigger, because this elderly relative doesn’t. hardly likes the dishes or ingredients that have increased over the last half century or so. Truffles for her are just a somewhat elevated version of dirt. She wants her red sauce, or at least heavy with cream. I tell her that eating like this won’t help her age. She points out that she is almost 90 years old and will likely outlive me and my love of raw fish.

And then I noticed that Avenue Italy – an upscale Italian restaurant with an old-fashioned menu – had opened a new branch in Redondo Beach, just down the hill from the original Italy avenue in Rancho Palos Verdes (31243 Palos Verdes Drive West, Rancho Palos Verdes; 310-377-3940). It’s a restaurant that luckily manages to serve something for all of us. I could have my carpaccio, while she could gobble up her fried calamari. My dish would be garnished with parmigiana shavings; his with a spicy tomato sauce. Happiness would reign.

Where Rancho Palos Verdes predecessor is stylish enough for a special birthday or anniversary, the Redondo Beach sibling is the kind of laid-back restaurant in Redondo Beach where you can drop in with the family on a Sunday night, for a pizza and an order. of lasagna bolognese. The spin-off doesn’t have a bubbling fountain in front, nor the kind of ducal setting one would expect in the hills of Tuscany. The restaurants reflect their neighborhoods: Rancho Palos Verdes is more formal, Redondo Beach leans towards Surf City without really going there.

But in either case, the menu ensures a happy moment – in a reasonably subdued setting. Around the corner, on Catalina Avenue, it was a Sunday night, every restaurant with a bar and a big screen – or 10 – was unleashed with the joys of Sunday night football. But Avenue Italy is not where you go to cheer on our Rams and Chargers. On the contrary, he is low-key enough to enjoy the almost forgotten joys of conversation. Which, in my case, meant listening to my elderly relative feast on the table of her exploits while playing mahjong online.

â€œMahj,â€ as she calls it, led her through the hardships of COVID, when she was forcibly isolated for months. And while I have no idea how it’s played, I’m happy to listen in awe of what could easily be an Elvish or Dothraki prayer. These are just sounds – but in this case the soundtrack to my burrata and my bruschetta.

In the hands of the Mahj and the complications, the elderly parent chewed up some crunchy squid, a classic take on a dish that always struck me more with the crunch and crackle than the pieces of squid.

On the other hand, my burrata was soft and supple, a dish as greedy as I can imagine this side of an aged brie, with a rubbery mozzarella skin filled with the essence of the cream barely held by inertia. There are freshly sliced â€‹â€‹tomatoes and roasted peppers on the side – flavors and bite in a friendly competition. The mixture of steamed mussels and clams in garlic and white wine helped me a lot through my Mahj lesson. And the meatball spaghetti – polpette – slowed the elderly parent’s thesis down long enough for me to hear the bar cheering.

The menu is extensive, but not overwhelming. There are long, slow cooked eggplants with parmigiana – so long and slow that it can be hard to tell them apart. The veal is breaded, the chicken breasts are mashed, the fish is made into cioppino (an exercise in surprise, with unexpected chunks in each spoonful).

The pizza is not topped with pineapple, praise the Lord! On the contrary, its many cheeses, various vegetables and, in one version, the meatballs of the spaghetti. They consume a lot of Parmesan and mozzarella here; Was there ever a time when Italian cuisine was without cheese? I can not imagine.

Ultimately, we emerged as the sun was setting over the ocean, on a cooler day, well fed, well fed, with something for all of us. My elderly relative came home to play Mahj. I walked over to my TV room to watch football. We shared a love of red sauce. But no red zones for herâ€¦ and no pongs for me. She was “building a wall”. I applaud for a sleeping bag. We both spoke English, but other than the rigatoni and fettuccine neither of us had a clue.