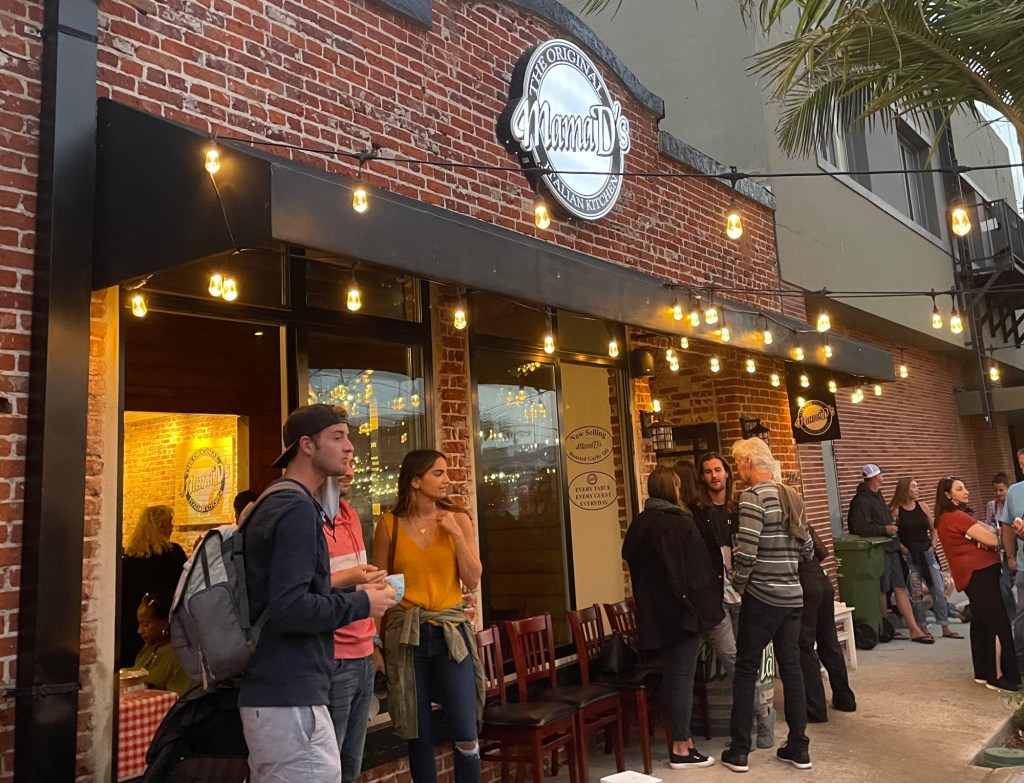 I have been a huge fan of Mum D’s since it was a casual storefront on the corner of Manhattan Avenue and Manhattan Beach Boulevard. Indeed, I took my wife there for a coveted dinner just before the birth of our daughter; I remember fondly how they pulled out a chair so that she could sit while we waited for a table.

This branch of Mama D’s is long gone. But new branches sprang up, guaranteeing us a steady supply of pasta and red sauce – the kind of food we would eat in our Little Italy, if LA had Little Italy. But we don’t. And so, Mama D’s is there to satisfy the need.

Which he does very well. And maybe never as good as at the new branch in the pedestrian section of Richmond Street in El Segundo. Where Mama D’s has finally gone from a simple Italian restaurant to a trip to a bustling square in Naples. If an accordion player were walking around, it wouldn’t surprise me in the least. That English is spoken is almost shocking; Mama D’s is a restaurant that takes us from El Segundo to Via Posillipo. It is an experience outside the body, as much as a culinary one.

Perhaps the most difficult choice is to sit inside rather than sit outside. On our warm late summer / early fall nights the street is bathed in diffused light, cool ocean breezes, and the purest Southern California air – fragrant in this case of garlic in abundance, oregano and basil, mozzarella and parmesan, onions and tomatoes, always tomatoes, which would fill the air with their scent, but nothing can compete with garlic. Nothing ever can.

Mama D’s is straight out of another era of culinary delight, and there are signs on the walls to remind us. One in particular says, â€œWe don’t have Wi-Fiâ€¦ are you talking about, pretend it’s 1995â€¦â€ Another is a list of rules that define gratitude, including â€œCrumbs under the table = family meals â€, as well asâ€œ A lot of noise = The people in my lifeâ€¦ â€Yes, they are a bit the brand card in their feelings. But then, it’s a menu with a selection of dishes named in honor of the staff (family?): Jason’s Spaghetti and Meat Sauceâ€¦ Susan’s Tortelliniâ€¦ Bob’s Bolognaise Meat Sauce with Mushrooms. The feelings are as tasty as the food.

For two decades we have lived in a world of carpaccio and risotto. Good things, there is no doubt – a lighter, more Milanese version of Italian cuisine. But, as always, the wheel has returned to nostalgia, to the dishes of our poorly spent youth, to the red sauce. I grew up eating Buitoni spaghetti, wagon wheels, seashells. It was a very special day when we invested in a bottle of tomato sauce – mainly my mom flavored her sketti with ketchup. (Heinz, of course.)

The freshly made tomato sauces used at Mama D’s weren’t discovered by me until I started roaming the Little Italies of the Bronx (Arthur Avenue) and Lower Manhattan – where Mama D’s cuisine takes me.

It is a menu rich not only in sauce, but also in memories. Consider the boxed specials, titled â€œFamous Homemade Ravioliâ€ – a version at Mama D’s is filled with ricotta, an alternative to spinach and ricotta, and Mikey’s packaged has minced meat. It has been a while since I crossed paths with a real Chicken Parmigiana (Michael’s, in this case), Chicken Marsala (Little Jack’s), Chicken Piccata (Hannah’s), and Chicken Cacciatore (Fiona’s). The dishes are all served with pasta and sautÃ©ed vegetables. Pasta is everywhere. It is a determining ingredient, along with tomato and garlic.

There is so much more, better sprinkled with a few chiantis. One is DaVinci, the other Il Molino. The wines I drank in Little Italy did not have labels. They were served in jugs. They were inexpensive. They were good. They were just right. They were so familiar. As another sign on the walls says: â€œFamily: we may not have everything togetherâ€¦ but together we have everything! “It’s to Mama D. So good. So family.